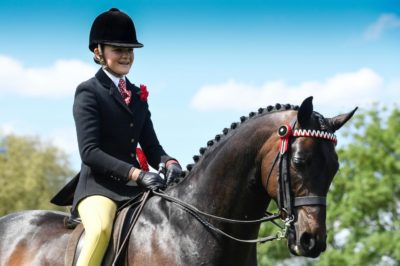 National entries for the 76th annual CHI Royal Windsor Horse Show officially open tomorrow. This year, Organisers have added more classes to the Show giving a total of 147 Showing classes – the highest number in recent years. The best of the Brits are expected to compete at the iconic venue and it is anticipated that it will attract the largest number of entries yet.

Over 55,000 spectators will visit the famous showgrounds set in the private grounds of Windsor Castle from 8-12 May 2019 for five days of unmissable competition. For those hoping to contend, the windows for entries are as follows: Show Jumping 5–12 March 2019, Showing and Carriage Driving, 7–29 March 2019.

New classes this year include Showing classes for Cleveland Bays (in hand and ridden), an RoR Open in Hand Show Series Qualifier, and In Hand classes for Pure Bred Arabs. New national Show Jumping classes include an Under 25 competition on Sunday. In addition The Pony Club is running its Dressage Championships at the Show and there will an Oxford – Cambridge Varsity match Dressage competition.

Show Director, Simon Brooks-Ward said: “Each year we receive the highest standard of entries which is a true testament to the Show, reiterating its importance in the equestrian calendar. With even more added to the Show’s programme this year, it will be extremely exciting to see which competitors shine throughout the week, and which classes are the most hotly contended.”

Britain’s leading competitors will be vying to make an impact in front of the home crowds. Her Majesty The Queen has been a regular contender, having had a number of significant wins over the years.

One of the country’s leading Showing producers Jayne Ross, who is well aware of what it is like to win at the prestigious Show, commented: “There is an aura about Windsor from the moment you arrive, and if you’re really lucky and you win, you get a fantastic picture of being presented with the trophy with the backdrop of Windsor Castle. There is just nothing quite like it.”

Classes to look-out for include:

More information on how to enter can be found here.