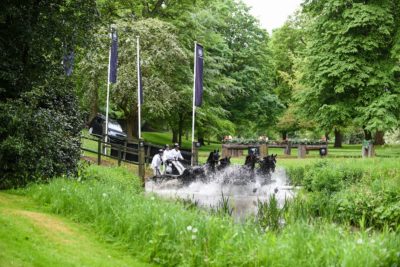 Royal Windsor Horse Show (8 – 12 May) is set to become the UK’s richest show for competitors by offering a record breaking prize fund at the Country’s largest horse show.   Showcasing a star-studded line-up in its spectacular setting, the increased prize fund and new additions to the event reaffirm its prominence in the global equestrian calendar and popularity amongst fans.

The annual Show, which has witnessed some truly special moments over the years, combines the highest level of sporting action with an unforgettable shopping and gastronomic experience, and a host of thrilling live entertainment.

Having grown in both stature and importance year-on-year, Royal Windsor remains the only UK event to host first-class international competitions in four of the eight FEI disciplines: Dressage, Carriage Driving, Endurance and Show Jumping, helping to attract some of the biggest names in equestrian sport, including Olympic, World and European champions.

Having drawn in six of the world’s top 10 riders in 2018, including the winner of the Rolex Grand Prix and the current world number one ranked show jumper, Steve Guerdat, the heightened status of competition is expected to draw in the world’s best horse and rider combinations in Show Jumping to date. This year’s CSI5* Show Jumping will be held on 10-12 May, culminating with the most prestigious competition, the Rolex Grand Prix on Sunday 12 May. History will be made in Windsor this year as it was announced that the Grand Prix’s prize fund has been increased from €300,000 to a staggering €500,000, bringing the total prize fund to €875,000.

Rolex Grand Slam of Show Jumping champion, Scott Brash, who will be aiming to emulate Guerdat’s performance last year, commented: “Royal Windsor is like no other Show, it’s set in one of the most spectacular outdoor settings, and attracts an incredibly knowledgeable and informed show jumping crowd. Having such a strong line-up of world-class competitors each year really reflects the Show’s growth and importance. I believe spectators will be in for something special this year and I really look forward to competing.”

Taking centre-stage on the evenings of Thursday 9 and Friday 10 May, and adding to the event’s international-standing, will be the Al Shira’aa CDI4* Dressage Grand Prix and Freestyle to Music. Having previously welcomed a stellar line-up of entries, the Castle Arena expects to host the most dominant forces in Dressage, including Charlotte Dujardin CBE and Carl Hester MBE.

New to the event and adding a splash of invigorating up-and-coming talent to the line-up will be the Pony Club Dressage Championships and the Under 25 Show Jumping competition. Taking place on Friday 10 May and Sunday 12 May respectively, stars of the future will be going for gold beneath the iconic Windsor Castle in two tightly fought competitions featuring the most talented young equestrians in the country.

One of the most popular events of the week, the high-octane CAIO4* Land Rover International Driving Grand Prix, firmly stands as the one of the UK’s most important Driving events, giving competitors the opportunity to qualify for the FEI World Cup™ Final. Created by The Duke of Edinburgh in the 1970s, the event takes place over four days of the Show and consists of three-phases: Driven-Dressage, the Marathon and Cone Driving.

On Friday 10 May Windsor Great Park will host the ultimate test for horse and rider – the CEI2* Royal Windsor Endurance Ride. Set around 120km of beautiful Windsor and Ascot countryside, it is one of the most picturesque long-distance rides in the UK.

As the most important Showing competition in the UK, the event kicks-off the Showing season with over 120 classes enticing thousands of competitors from across the country. With several new additions to the already extensive programme, including the in-hand pure bred Arab and part bred Arab class, and the Cleveland Bays, which brings Britain’s oldest breed of horse to the showground, it is expected to be the most competitive year yet. All eyes will be on Her Majesty The Queen and her horses, as she attempts to reproduce some of her long list of successes at the Show.

Along with the top equestrian sport on offer, ticket holders will be treated to exceptional entertainment across the five-day event. International displays include The Hungarian Csikós, Stunt riders from Azerbaijan and performers from Oman.  From home, The Musical Ride of the Household Cavalry Regiment, The Household Cavalry Mounted Band and The Musical Drive of The King’s Troop Royal Horse Artillery will take centre stage in the Castle Arena throughout the week.

Adding some grassroots action and drama to the week’s performances will be the Land Rover Shetland Pony Grand National and the DAKS Pony Club Mounted Games. As firm favourites among crowds, the young age of these competitors will be no reflection of their bravery as they throw themselves into explosive races much to the delight of the marvelled spectators.

Luxury shopping in an iconic setting

This year’s Show will feature over 200 boutique shops hand-selected bringing some of the finest retailers to the famous setting. From equestrian-musts to fashion and homeware items, the Show is renowned for its considerable variety. Additionally, visitors can enjoy a number of food and drink outlets catering for all tastes. Whether you’re looking for a great burger, organic or vegan treats, a special afternoon tea or some delicious seafood, there’s something for everyone.

On the evenings of the 9, 10 & 11 May, Royal Windsor Horse Show will host The Pageant 2019, a musical feast of entertainment which celebrates the 200th anniversary of the birth of Queen Victoria. The 90-minute show will encompass everything from the Music Hall, the Industrial Revolution, Gilbert and Sullivan, Charles Dickens, and our military heritage (The Crimean War and The Great Game). More information about The Pageant 2019 can be found online here.