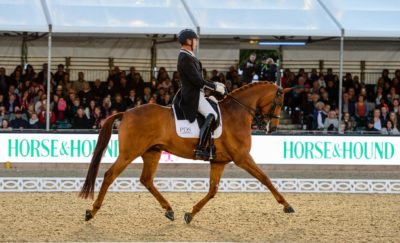 Royal Windsor Horse Show is delighted to announce that leading British Dressage riders, Carl Hester MBE and Charlotte Dujardin OBE will join the competitive line-up at the Show this May (9 – 13) when it celebrates its 75th year.

The Al Shira’aa Grand Prix and Freestyle to Music, taking place on the evenings of Thursday 10 and Friday 11 May respectively, will attract some of the world’s greatest riders as they head to the private grounds of Windsor Castle for the CDI 4* FEI Dressage competition.

After captivating crowds with her auspicious prospect, Mount St John Freestyle, during a demonstration at Olympia, The London International Horse Show last December, the triple Olympic champion, Charlotte Dujardin, and her new Grand Prix partner, will be gracing the Castle Arena at Royal Windsor Horse Show.

Dujardin and the nine-year-old Hanoverian mare who has been nick-named ‘Mrs Valegro’, recently took the Dressage world by storm after achieving an 81% debut Grand Prix score at the recent national show in Hartpury. The duo are anticipated to be Team GB medal contenders at the FEI World Equestrian Games™ (WEG) this September and will be competing at Royal Windsor Horse Show as part of their road to WEG campaign.

Charlotte Dujardin, OBE, said: ‘I’m really looking forward to Royal Windsor this year, and I am especially excited to showcase Freestyle’s talent to the British public. Freestyle has been performing so well this season so a win at Windsor would be really special.’

Joining Dujardin will be Carl Hester, Team GB representative, who will be trying his luck with Hawtins Delicato, a 16.3hh British Hanoverian gelding. Hester will also be looking towards WEG team selection with Delicato, who also recently made his national Grand Prix debut, scoring 76.8%.

Hester, who has many years of international success and experience, is no stranger to winning at Royal Windsor, having taken the 2017 title riding Barolo, and is a sure contender for prime podium position.

Carl Hester, MBE, said: ‘Royal Windsor is such a unique Show, the setting is like no other and the competition is always fantastic. It is great being back after winning here last year, Delicato and I are looking forward to giving Charlotte and Freestyle a run for their money!’

Royal Windsor will give WEG hopefuls the invaluable opportunity to compete in front of a WEG Dressage judge, an element that is expected to draw in many of the biggest international Dressage names to the Castle Arena.